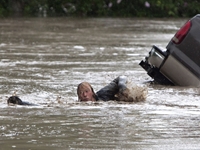 Last week, parts of Boulder County in Colorado experienced above average rain totals. The effects of the storm have spread across 17 counties and claimed eight lives, according to a local NBC affiliate. Some warnings were issued, but the unprecedented damage caused the state to seek out assistance from the Red Cross and National Guard. The rain has stopped as of Tuesday, but now residents have to clean up the mess Mother Nature caused.

However, conditions in Colorado are looking up, as state officials noted that they were able to cut their list of missing people in half—from 1,253 to 648. The local National Guard is working to help others evacuate from towns that were hardest hit from the floods, even using helicopters where necessary. Many nearby bridges and highways have been impacted, and commuting will likely be tricky during the clean-up process.

The flash floods damaged about 19,000 homes, 1,500 of which are completely gone. Many homeowners who will seek assistance from insurance companies will hear that floods are not covered under their plan. Statewide, only about 22,000 properties and businesses have flood insurance even though some locals are in high-risk flood areas, USA Today reported.

About 10 to 25 percent of Colorado families have flood insurance, while in comparison, about 50 to 60 percent of people living in parts of Florida and New Orleans have coverage.

After last year's wildfires in Colorado Springs, the Federal Emergency Management Agency recommended residents look into flood insurance to be a part of their recovery plan because burn scars from the forest fires will last at least 10 years. Rain totals in Boulder hit more than 16 inches, already beating its city record of 9.59 inches in 1995, according to the Weather Channel.

Business continuity consultants can help cities and towns create an extensive plan for areas that might be more prone to natural disasters. They can establish evacuation procedures across local communities and help residents prepare for potential aftermath.