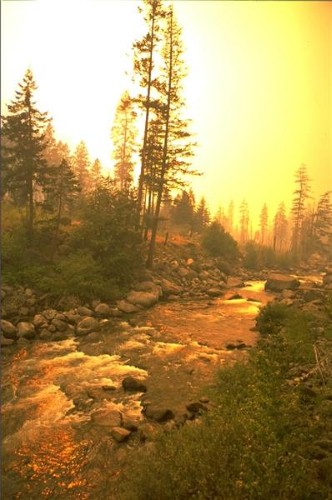 With global warming, scientists say that wildfires like the ones in New Mexico and Colorado, will only increase over the years.

The wildfires currently raging in Colorado and New Mexico are previews of what is yet to come over the next 30 years, researchers reported earlier this week. With climate changes in effect, all of North America and most of Western Europe will see wildfires more often by the year 2100, scientists wrote in the journal Ecosphere, a publication of the Ecological Society of America.

As reported by Reuters, the international team of scientists used satellite-based fire records and 16 different climate change models for the research. Wildfires will increase due to rising temperatures in temperate zones but the risk of fire will actually decrease around the Equator – especially in tropical rainforests – because of increased rainfall.

Max Moritz of the University of California-Berkeley and lead author of the study, said that they found what most fear – increasing fire activity across most areas of the planet.

"But the speed and extent to which some of these changes may happen is surprising," Moritz said. "These abrupt changes in fire patterns not only affects people's livelihoods, but also they add stress to native plants and animals that are already struggling to adapt to habitat loss."

In a separate study, researchers approved of a controversial technique for fighting fires, which is intentionally setting controlled fires to manage risk. The idea is to reduce the amount of fuel that would feed a wildfire and, according to the study, they do not cause substantial harm.

As a whole, climate scientists have projected that wildfires would be more likely in a warming world. Other global warming effects include more severe storms, floods and droughts.

With the increased risk of wildfires and other natural disasters, businesses would benefit from ensuring they have a business continuity plan in place and that there are proper hot sites available for their employees. Pairing with a disaster continuity consultant can aid companies in the not only the preparation and initiation of preparedness plans, but also the after effects.